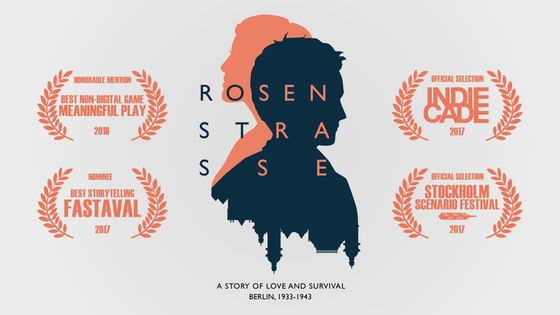 We're on our way out of Dreamation, and we were glad to see so many of you there!

Thursday night, we had the launch party for Rosenstrasse. While the subject matter of the game is solemn, we're happy and proud that we've been able to bring it to so many people. We were honored to celebrate with friends and fans.

We also had four runs of the game, and were pleased to talk to players about the powerful experiences that they had. Even though the eight characters are the same in every game, there are differences in player interpretation, in the choices the characters make, and in the meaning that the group makes from it afterward.

I even got to tell the Rosenstrasse story to someone who'd never heard it before - a personal favorite experience!

Tomorrow, Mo and I are going on an incredibly exciting adventure related to the game. We can't wait to share the news with you!

57 hours into the campaign and we are already 72% funded! We are very excited to be getting closer to our funding goal and are so thankful to those of you who have backed us and are helping make our dream come true.

For our first exploratory update, we thought we should shine a light on the play experience of Rosenstrasse. When we were guests at IndieCade 10 and Meaningful Play, we found that while many people were sold on the idea that games are an excellent medium to explore and teach serious subject matter, they were often surprised to find out that Rosenstrasse wasn't a video game or a board game. At roleplaying game conventions we often find the opposite: people who understand how tabletop or live action roleplaying games work but often blink when they find out that we are using the medium to explore subject matter as serious as the Holocaust. So we knew that people would want to know more about what it was like to play.

So, what does the game look like when it is playing? This can vary from one run to another because it is set up to be played either as a live action game (also known as a "chamber larp" where players physically move and interact as if they were the characters) or as a  tabletop game (where players stay seated through the game, narrate any actions that their character might be taking, but speak as if they were the character). In the video below, you can see some actual scenes being played and see what those different play modes look like.

What happens in the game? Early on, the characters start to develop relationships. They get a chance to see each other as people before the shadow of the Third Reich came to Berlin, they flirt, fall in love, come to know each other, they making connections, they plan for the future. As they do, players start to get more and more expressive when playing them. You can see the investment in their character's identity develop and how their reactions to what is happening become genuinely held. We like to say its feels like living 10 years of a marriage in 4 hours.

And what is the tone of the game? Over time, the emotional tension continues to relentlessly increase. As the Reich becomes more oppressive, the act of reaching for a new scene card takes on a sense of foreboding. It's not uncommon for players to hold their breath while waiting for a scene to be introduced, to let out a sigh of relief when the scene concludes, or even tear up like one might while watching a movie. When leaning on each other to cope with the increasing pressures, character relations deepen - and with them player relationships do too. At the end of the game, it's not unusual for players to express deep gratitude to one another, or even share a hug.

And after it's over, how do players describe their experience? Players describe the game as being full of intense emotions such as fear, love, despair, hope, terror and pride. They have described the experience as "like living through a novel" or as if they "felt like a character in a heartbreaking movie". Many people have contacted us months, or even years later to tell us that they still think of the game - and of the characters in Berlin they once spent some time being.

I hope that this helps you understand a little more of what Rosenstrasse is like to play!

We'll be revealing our stretch goal targets very soon. We really hope that they will be realized as we think they will add a lot to the game overall. Please share the link to the campaign to help us get the word out!

We are totally blown away by your support on our first day! Thank you so much!

In the coming weeks, we will have updates that introduce Jess, Mo and the team, as well as pictures and videos we didn't use in the campaign video. We'll link podcasts and interviews and talk about the research that went into the game- and the research we did about the game!

In the meantime, please keep sharing the link and talking about the game! You can use the hashtags #Rosenstrasse and #ResistanceIsPossible when you tweet about it.

There is so much more to come and we can't wait to share it with you!